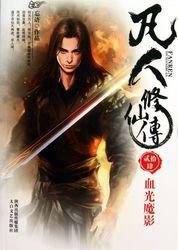 A Record of a Mortal's Journey to Immortality

So many dark beasts, almost every cannot have in fearful Divine Ability of Void Refinement time, the at once accumulation such. 【Writing first round network】 The even if Han Li three people are not ordinary existences, in the heart sank.

Han Li is good, pays the card in a hand to be many. If willing to pay certain price, regardless of Gold Devouring Beetles group Profound Heavenly Fruit, extinguishes kills this to do the dark beast naturally not to be a problem.

He naturally appears quite calm.

Otherwise even if can win narrowly, oneself is unable the whole body to draw back certainly. Even if vital energy taking a loss is too big, makes its behind traveling schedule barely survive sufficiently step by step. Also what discussed that seeks for any ruins, eradicates restrictions.

Is good because of these dark beasts, although accident/surprise has stopped up Han Li and the others, actually already knew the fates of front several waves of companions, under startled anger, is critical situation not meaning of initiative act.

Only wants to tie down them temporarily, is good to wait for that more dark beasts rush to this place.

Han Li and in the Shi Kun ear has resounded the sound of this female sound transmission immediately:

„Two Fellow Daoist, we leave the Dark Beast Forest exit|to speak not to be far now. So many dark beasts do not need to spell hardly, we broke through temporarily separately, wait till outside the forest to gather the same place again.”

„Good, depends on the word of Fairy Maiden.” Shi Kun also some similarly planned of being without hesitation agrees.

As if saw the Liu Shui'er three people of differences, is Third Eye Demonic Beast of body ultra peer, suddenly a low roar.

Other dark beast' show' moves, suddenly threatened at the same time opened mouth, dozens black' color' light beam stirs up' shooting' to come, the dense and numerous claw glow are appear in void in an instant, covers the Han Li three people of figure thoroughly below.

But the Han Li three people previously extinguished have killed many only dark beasts, coped with such attack actually already somewhat to deal with the attainment.

He changes into the pale filament to stir up' shooting together', and several flash on the way, the gassed thread made several arcs to be curving, strange from dense and numerous light beams and claw glow flashes, but, had appeared in the crowd of beast behind upper air, did not have faintly again submerged void disappears.

Both simultaneously rays of light greatly puts down, this female changes into one blue white two' color' light group to stir up' shooting'.

These black' color' light beam strikes on the light group, unexpectedly clay ox entering the sea did not have the sound.

Appeared as for Shi Kun Divine Ability is overbearing.

He is only coldly snorted, after body battle armor Spiritual Light puts greatly, two strike a palm in the chest front ruthlessly mutually.

After the loud sound of bang, its body all around appears immediately point yellow light.

Reason that said that this light barrier is strange, because the light barrier surface appears dense and numerous spiral-shaped rune. But these black' color' light beam strikes on light barrier, sends out rumble the dull thumping sound unexpectedly, along with it under rune flashes is opened by a ball.

Shi Kun took advantage that this opportunity body turns, yellow light protected its at once to sink underground, and escaped to walk in the underground more than ten zhang (3.33 m) place crazily, speed quick unexpectedly as if not in the least compared with Liu Shui'er slow many appearance.

These dark beasts are naturally impossible so really to let three escaping easily.

Under is first Third Eye dark beast one angrily roars, beast group at once is divided into three waves of soaring aura that but it, respectively along Han Li three people of carry-overs pursued crazily.

By Han Li worry, may not from the sky escape under slightly the fast full situation, naturally is not the following these trifling dark beasts can overtake.

A food free time, he melts the gassed thread to the pursuing troops fling without a trace.

Because actually his escaping light in airborne really conspicuous, has one of the several other dark beasts from the forest to clash on the way, wants to attack his appearance.

But Han Li is only sleeve robe one volume, dozens green light the storm stirs up' shooting immediately brashly'.

No longer conceals the Bamboo Cloudswarm Swords true prestige to be able, all dark beasts of stop instantaneous was cut the innumerable truncations.

Even if 1-2 dark beast responses are quick enough, comes and wields the claw to emit wishes of claw glow to prevent 12.

But azure' color' flying sword actually as if invisible thing, the piercing claw glow that but flashes turns a blind eye, cut directly on the dark beast main body. Let their instantaneous death.

Therefore above, Han Li does not hesitate the magic power moment not to stop, finally flew to escape big half a day later in first even/including, flushed from the dark jungle, departed Dark Beast Forest thoroughly.

Even if now or night, but that thick green grass aura heads on.

Under the meaning that but Han Li escaping light had not stopped, the azure white light silk flashes , to continue goes to the front from out of the blue.

His in the eye blue glow flashes, respective one sweeps to go to about.

So spacious does not have the terrain of thing, spiritual eye Divine Ability naturally can display peak.

The instantaneous free time, all in surrounding area 50 Km has printed in the Han Li brain clearly.

Far region, although can also see, but blurs extremely to get up.

Had not discovered that any threatening existence, Han Li exhaled lightly, again emits Divine Sense, sweeps the nearby region, receives to return immediately.

After a thunderclap, the back clear wings were defeated and dispersed to vanish.

Afterward he turns around, both eyes narrows the eyes looked at several pasts in the Dark Beast Forest direction.

So long-distance range, these dark beasts, even if flies into a rage, should not escape such place to continue to chase down his.

However if they also really dare so to do, Han Li did not mind all solves conveniently but actually these ten dark beasts.

Formerly reason that is not willing to pester with them on the road, he naturally cannot fear these dark beasts, but dreaded that was pursued by more dark beasts, fell into tight encirclement in.

Standing of Han Li both hands behind the back on mound of earth the motionless, intermittent cool breeze has blown from the body, making its front piece flutter with the wind, as if Immortal people ordinary.

Suddenly under his single-handed turn over, in the hand suddenly left blood red' color' law plate, the above faint silver threads flash.

The Han Li vision flashes looked at hand during technique plate a while, a brow wrinkle.

„These two, since converged together, distance place is not quite far, how immediately not to come. Met what to trouble?” Han Li muttered several, in the hand the thing suddenly vanished to disappear again in a flash. Then another lifts the head, deeply looked at one in some direction.

His silhouette azure light flashes, suddenly changes into together soaring of azure rainbow suddenly, only circles after nearby in the sky one, to looks at the direction to stir up' shooting' to walk.

Although escaped fast does not make a sound formerly like that as if teleport inconceivable, but escaped the fast quick also absolute no small matter.

After moment free time, Han Li escaped in two 30,000 remote, to in the sky of Prairie another place.

Han Li in escaping light, in the eye blue glow flashes continually several, on the face has appeared different' color'.

After azure rainbow sound from out of the blue collects, Han Li appeared in void of hundred li(0.5km) away, after the figure side appeared, on unemotionally looked toward the front.

Is leaving he more than hundred zhang (3.33 m) far places, the two groups of people are facing each other across a great distance.

In two people opposite place, has a man and a woman to stand shoulder to shoulder.

But the female Liu Mei / slim eyebrows black item, flesh fair extremely, the upper body is wrapping a green' color' leather clothing, is with a crash excited the letting person who its plentiful stature serves as contrast.

But what is strange, the two lower part all was actually covered by the (one/first) layer white clouds, and has the running water light sound clearly to send out faintly.

Although Sea Royal Race does not border on with Heavenly Cloud directly, but is well-known, this clan and Horned Worm Race are actually the alliances.

No wonder both sides meet, so at daggers drawn.

Liu Shui'er beautiful eyes one happy, in the heart calm got up immediately.

How Shi Kun not intimate thinks, but the surface overshoots Han Li to crack into a smile, greeting of guest polite air/Qi.

Opposite that Sea Royal Race men and women, actually vision suddenly one cold, sizes up Han Li to get up with the bad look up and down.

But after seeing Han Li unexpectedly is only about Upper Race seventh level cultivation base, two surprise looks at one mutually, from saw surprisedly' color to the grid in'.

„Your Excellency is also the person of Heavenly Cloud!” That male pair of eyes opens the eyes has opened the mouth, sound loud and clear extremely.

„Currently speaking, for the time being is. Two do Fellow Daoist here, is it possible that want to approach below companion fight?” Han Li god' color' immediately as usual, and indifferent question.

„To their fight? If is really so, they can also stand well here!” The Sea Royal Race man has sneered, saying that somewhat ridiculed.

„What did you say? Big tone! Hehe, Shi no talent, pours to ask for advice at once, is known as three big Water Race aristocrat Divine Ability.” Shi Kun hearing this, actually does not get angry instead to smile, figure in a flash takes a stride to go forward, gloomy saying.

Read “ A Record of a Mortal's Journey to Immortality ”

Stay informed of NEWEST chapters of A Record of a Mortal's Journey to Immortality with notification directly sent to your email.