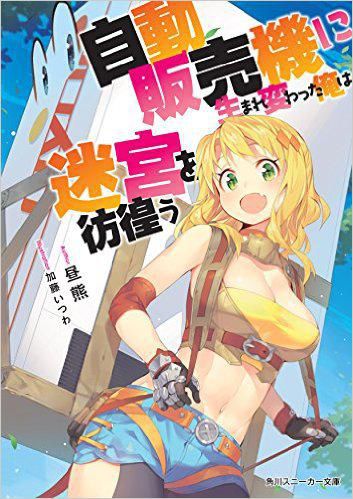 I Reincarnated Into a Vending Machine

Since witnessing the elders' success, other members have become active.

I will cautiously bury them with motivated movements against the frequently appearing Monsters. I realized that I was observing the movements of the two of the gatekeepers, but these two are stronger than I thought.

Both of the main weapons are not moving at a speed that does not stop at eyes either, they are not spiritual like rumis, but there is no waste of movement.

It was stuttering even gaze into the blind spot of his enemies both like doing perfect you communicate in the wink and a gesture to a stabbing scene many times.

I guess that's what Ai says is called breathing.

As usual, working with members, there are a lot of highlights, Kayoriir, who is seriously serious this time. Hold a dagger in both hands, cut a partner with skillful dagger handling in short distance battle, throwing a throwing knife when there is a distance. By the way is the hit rate is 100 percent.

Ramisu is also struggling with defeat. Without being swayed by my own power, I chew Monster while treating basic movements.

Until now, there was no choice but to do defense during battle, but from now on it can be her power. That is really nice.

「ラッミスさん。 I think that it will be easier if you drop the center of gravity a little more. "

Even now it is in battle, but the grandmother guides us near Ramis. There is a difference between swordsmanship and body skill, but there seems to be similarities in how to move the body and feet, etc. The results that Ramisu pleaded are now in the state.

Ojii-san is magic specialization, and the headmaster Sensei is a bow and magic, so body treatment proved that the old lady is superior with a discontinuity. Bean president is the body art, so it is exchanged with an old woman and is teaching things like Kenpo.

I am fortunate that the teacher is superior and the student is obedient and serious, and it is clear to the amateur that the sharpness of the movement will increase day by day.

And, as Ramis begins training, it is interesting that the gatekeepers, the head of Keriole, and Mishuel watch as sarcasm while listening and listening.

Even now, I am pointing seriously to see if there is anything I can steal at all.

"Yes, I will step in with all my energy."

Vibration is transmitted steadily over the back, and a dull blow sounds.

I wonder if it is a good feeling now. It seems that it has come to be able to understand the response as long as it is on the back, so that it becomes possible to judge whether it is a single blow of whole body without seeing it.

Glanced past the shattered bone and cuts the original pieces, was scattered around.

According to the policy that practical warfare will be more than anything else, the rhythmic special training is continued while being surrounded by enemies.

There is no sense of crisis though the number of enemies is lighter and over twenty are exceeded, Ojii-san and the headmasters Sensei and Hurumi, who are on the platform, are watching the warm Mil Kuti.

Occasionally, some enemies approach the uncharged cars, but they were momentarily killed by arrows and magic. There is no sense of security.

However, I am not prohibited. When did you know what the King of the Netherworld appeared to attack you?

"Well then, shall we try to turn around without Mr. Hakkon?"

I was dropped from the back of the rumis and I also became a visitor.

What I focus on recently is to fight normally without me. It's obvious, but can't it well in Loomis.

It seems that if the force is too much, just stepping forward as usual, if you are not conscious you will jump like a jumping movement.

Because I lived in a body that survives much more than ten years, it acts naturally in daily life … …Occasionally, you only make mistakes, but it seems that control will not work out when you do your best in battle.

"Do not be afraid of your power. You have a body that will not break even if you exercise that strength. It has not only strength but also sturdiness. "

That's right. I do not even notice that I did not notice until my grandmother pointed out, but bones and muscles can not have it if I move with just enough power. That making it possible means that she has not only strength but also the robustness and flexibility of the body that can endure it.

The grandmother's rating was that the body was equal to or higher than the first-rate hunters.

When listening to only the voice, it is reminiscent of the practice scenery of the sports, but when looking at it, the picture that rumis which runs with the sand raise running is extinguishing the enemy to the powder dust comes in.

I chase with the eyes of the rushing full of rushing, but I can not keep track of it and disappear from view. If you try it as an opponent, it does not matter.

However, it seems that the burden on the body is large that moves with full power, and prohibition of use for a long time is prohibited. Now that there are two people who can use healing protection, I do not need refraining to grasp my limits.

It seemed like I had been bouncing off my friend several times, but I ended annihilating the enemy.

"Since enemies also disappeared, shall we do so far? I'm hungry, I should make it rice. "

Director Sensei lifted his voice from the loading platform, and all of them gathered.

The people who participated in the battle had some minor injuries, but the grandmother and headmaster Sensei treated them instantaneously and were cured completely.

"I have heard rumors."

I saw the arms that the gatekeepers do not have scar, and I am impressed.

Capable of healing in this world for much of standards only when the demon king frog people so difficult to judge, but two surprises like unless you see a substantial recovery force of will.

Because he has healing ability, it is said that training can be carried out in actual battle.

Lunch here is not a vending machine – it is supposed that everyone cooks and eats. Director Sensei says,

"I'm studying food and arms 鈍rimasu. You can cook and you will not lose. Also, I am motivated that cooking is good regardless of gender. "

Following the grateful teaching, it was decided to cook on a regular basis.

I am in charge of only soup and drinks and food ingredients. It seemed pretty valuable to be able to take plenty of vegetables and fruits during the expedition, and I was thankful that only that was sufficient.

"What do you want the King of the Netherworld to do? 見逃せば、情報が伝わりこうなることぐらいは予測できただろうに」

Although Hurumi did not speak to anyone, he would have thought of a solitary tale, but its voice was unexpectedly big and it got all the attention of all.

"What do you mean, Hurumi?"

"Well, I heard that he is a chairman. Absolutely, that fellowship does not quite understand. It was possible to kill everyone with that ability. Jackon barrier is awkward because it measures's had been.

If I could continue to attack, it certainly ended up running out of points someday, and if it was a defense-minded opponent, there would be as many ways to stop it and stop motion without killing it.

"It sounds as if the purpose was to show off your strength. Loomis and Hacken didn't kill from the beginning as a liaison officer. In order to convey the message that I leave here …Is not he thinking too much? "

Did not you want to kill from the beginning?

The king of the netherwolt talked as though he was watching the fight with the evil spirit. If so, my

And killed in front of Hulme and Xu became intimately familiar with the desire for revenge. To show off overwhelming power and give a strong impression so that you will not forget yourself … …Although it is possible to read deeply.

"But, as it seems, there are advantages to the King of the Netherworld. Would you like me to come to subjugation? "

"That does not understand me either. It is usually a talk that you can do with provocation, but if you come to the dungeon with something purpose, you usually want to avoid noticeable things. Will it have already reached the purpose, or is this something that leads to the purpose …? "

Chairman Bear breathed heavily while setting his arms. With that breath the flame of the burning fire is swaying greatly.

The accident of the hierarchy is the occurrence of the frog frog demon, it is the assault of the duo snake demon which is too big. Besides, the hierarchy revived as if we measured in each hierarchy.

People who thought of something to do with it seemed even more natural. If so, what is the purpose really. 姿を晒してターゲットになるような真似をして各階層の猛者が集まってきた。

Why do not you think about becoming the king of the Netherworld? There is also a position in the number three of the demon army. Free movement is also allowed, but if there is a big plot it is usually related to the Satan army.

……It seems to me that it would normally be thought that collecting coins of the hierarchy mains and fulfilling wishes, but he is throwing away the coin of the evil spirit king. What, what is aimed behaviors.

"Information is too little. I can make as many speculation as possible … …If there is no confirmation it is just a delusion. "

Hurumi is getting groaned with his arms folded. It seems that the brain is being rotated fully as much as steam from the head seems to come out.

"HM, it surely destroyed prior to you want to group.

"It seems not to be such a person who can show such a surplus. Too bad, Ojii-san.

I can not see it as if my grandmother is in trouble.

If Hurumi's reading is right, there is something behind this behavior. If you defeat it would not be an end.

Even though it is a strong enemy, it is said that further problems will increase.

"But first you must defeat the King of the Netherworld!

The people who had been thinking hard on the words of Ramis lift their faces.

That's right. If we do not win it will not be the end. We must also consider the partner's plan, but if we lose we have neither the original nor the child.

"I do not participate in battle, I think that the idea of ​​the nether king makes the most probable high expectation to the extent that it can do. Everyone concentrate on the fight. "

Rather than thinking about me, is it more appropriate to leave Hulumi with more knowledge and early rotation of the head? But I will keep it in mind. I certainly do not feel bad.

Well, because there is no predictive ability, I think that the probability of ending with a mere imminence is higher.

Read “ I Reincarnated Into a Vending Machine ”

Stay informed of NEWEST chapters of I Reincarnated Into a Vending Machine with notification directly sent to your email.