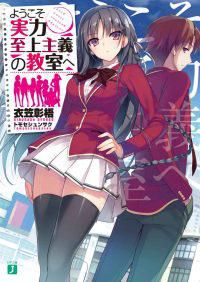 Classroom of the Elite

○ It is monologue of Kushida Kikyō.

Does the person live according to his ideal? I was… under his influence. I am used to my ideals.

When I got a sense of understanding I understood that it was a privileged appearance among homosexuals. I could study because my memory was better than people. I am good at exercise and I am confident in talking.

It's dexterous even in the hands, and it has the wisdom to respond flexibly to the incident's incident.

Well then I am a perfect person?

If so, the answer is no. There are obviously more pretty children than me, and smart children and good children with motor nerves have many in this world. Such is commonplace. Yes, it is natural.

However, I think that there are things that are less and less for people, something that others do not want to absolutely lose.

You can look good or study. I like a video game or singing ability.

When I lost to others by such a superior one, I feel frustrated for people.

I had a big complex in everything above the average.

Whenever I lost to someone close to me, my feelings were greatly shaken. Every time I lose everything, darkness was born in my heart. Sometimes I vomited with intense stress.

The reality is cruel. Although I am not an ordinary man, I am not a genius.

It was still good when I was little. Just clearing out the small tasks made my surroundings foolish.

He said that he is a genius and a priest. I felt good. My heart fell.

Whatever I did was the best in my class. He was a hero and an idol.

After I went up to junior high school, I began to meet people who exceeded me in various fields.

I can not win against opponents who can not win. The reality has come to my heart heavily and deeply.

So I looked for an escape. To escape from this suffering.

I want something that will not be defeated by anyone. I want a respect and envy. But you can not study or exercise. There is no enemy.

The answer that I came was — to get more "trust" than anyone else.

I decided to get a feeling of superiority by being liked more than anyone else.

And I became a popular person. Classmate, senior junior, sensei guardian, a stranger who walks in the neighborhood.

Becoming a human being liked by everyone, I became a loser to others.

To be honest, that day was happy.

I was able to know at the same time. Trust is that it is a refreshing sake that can not be replaced by anything.

And I understand that there is existence of "secret" behind the feeling of superiority of trust.

When a person finds a trusted opponent from the bottom of the heart, it exposes the secret inside.

The boy who is the most popular in the class secretly thinks the unexpected troubles of the smartest child in the class, from the serious secret of the body to a trivial secret, I took control of everything. I got the information. Every time I heard the trouble that I can confide by making friends, my heart flew.

Every time I grasp the important information that can also be called the opponent's life, I trembled with delight.

I am more trusted than anyone else. It is my mission to think so.

But I was not noticed.

That trust is only available from living with a solid foundation.

I had a huge stress in my heart and I spent my days.

AndThat incident happened. It was different, I woke up.

But that can not be helped.

Because, everyone rejected me.

It can not be helped.

Because I hurt people, even if they are hurt, I can not complain.

I repeat when I get done.

Is not it natural?

But, the ideal human being "I" in everyone was broken once.

Respect and envy disappeared, turned into fear and hatred.

That is not what I want.

There is only one I seek.

To be trusted by everyone.

Getting that "superiority" once more.

So I will never repeat such a thing again. I vowed so.

So I made my heart excited in my new school life.

So this time I will make it succeed.

So I decided so.

For me, the entrance ceremony which was supposed to be the first step was the worst day.

Because I met Horikita Suzune again on the bus to the school.

There is only one person who knows that affair.

As long as he is there, I have no real peace.

Read “ Classroom of the Elite ”

Stay informed of NEWEST chapters of Classroom of the Elite with notification directly sent to your email.