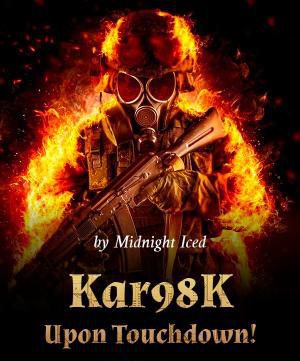 On the coast, in the sunset.

Aruka runs freely, the bloody fog on his head, that is his life...

Aruka leaned forward and fell uncontrollably on the beach.

Looking at the killing tips on the top right of the screen, he stumbled on the beach and he couldn't help but be dumbfounded.

Xiaokang exclaimed, "I am going! It is the second team!"

"Come back! Go back to the sea!" Wei Shen said quickly.

At this time they are still some distance away from the front area, hard punch is definitely not rushed, and there are no bunkers on the beach.

At this time, returning to the sea is not the best choice, but they can only choose to go back...

In a twinkling of an eye, the gunshots on the beach are connected!

In the rain of bullets, Xiaoxiao looked back and ran a few steps, and suddenly could not help but say, "What should Aru do?"

When I heard the small eye-catching words, Aruka, who was desperately squatting on the back beach, couldn’t help but see a glimmer of hope...

Wei Shen glanced, biting his teeth, "You don't want to run! I will help him seal the smoke."

Said in the mouth,

In the hands of Wei Shen, who is playing the crazy snake skin in the rain, a smoke bomb is slipping.

I saw him jerk and turned to the back of Aruka, and immediately rushed to the head and did not return to the scorpion to continue the snake skin.

The smoke bombs landed on the beach and rolled to the front of Aruka, but Aruka was not happy.

He always felt that this Powell god was not so much to help him seal the cigarette, it was better to help him to scent....

In this ruthless unilateral target, this wave of 4am sea navigation plan is very heavy casualty when landing!

In the end, except for the isolation of the first sea, the two descendants of Wei Shen and Xiao Ying were all knocked down.

No way, Liu Zilang's four people's firepower is too fierce, even if you walk and then snake skin, can you still hide all the bullets?

If it was not left alone when it was ashore, it was the closest to the seaside when it was running. This wave of 4am might have to be destroyed here.

Even so, the three people who fell to the ground, Aruka, Wei Shen and Xiao Ying,

There is no way to save the solitude in the sea. This stagnation has once again become "isolated."

Hosted on the stage.

"Cough... It seems that even with the adjustment of personnel, 4am still maintains their unwritten tradition..."

"Just kidding, but the 4am wave was so easy to find the ship from the airport. I didn't expect it to be attacked by se7en2 when I landed. It was really good!"

"Yes, I should be able to go there now. I suggest that he go further to the west and land again."

"Well, vic, they can't always block the coastline. He just has to find a place to enter the circle."

"Hey? Wait a minute, vic doesn't make up for the bag? Why is he going back to the bridge?"

Under the clarification of the audience and the audience's doubts, Liu Zilang, who ran to the bridge, jumped and jumped on his happy motorcycle.The next moment, he pulled the throttle.

However, he is obviously just a good way to make up, but after the completion, he continues to fly along the coastline.

In the sea, the orphans are potentially swimming underwater in the west, and want to change places to land.

He suddenly heard the sound of the car on the shore.

When I saw it on the surface, I found a motorcycle stopped on the shore.

He couldn't help but see it, and immediately sneaked into the water without thinking, and continued to swim forward.

After swimming for a while, he floated up to breathe and turned his head and found that the motorcycle appeared again on the coast.

On the commentary stage, Rongye couldn’t help but say, "Vic is going to kill it!"

"He really wants to get rid of the roots." Msjoy shook his head and smiled. "But it is still a child, but it is a bit too inhuman."

Just then, the big Sima on the side suddenly said, "Hey? I seem to hear other cars."

When Rongye heard it, he couldn’t help but breathe. "Is it true that they also drove in the autumn gods, is this too embarrassing?"

"Not at all?" msjoy scratched his head.

At this time, the viewing angle of the guide suddenly pulled into the air.

In the big screen game screen.

I saw two cars and a jeep, flying in the mountains and meadows.

And in the sky above them, it is a plane across the sky!

"My God! Dreaming of a young boy!" Big Sima exclaimed. "Which team is this player?"

"I am..." msjoy carefully glanced at the big screen of the game. "It seems to be the sss and tyloo team!"

"No wonder, it turned out to be these two teams."

Rongye slightly decapitated, "The two teams are the three-guarantee mononuclear system team, sss is Lily, tyloo is the night eagle, like this team around this sniper is too empty."

As the big Sima suddenly improved the tone of the tone, the audience under the field did not surprise the eyes!

Because sss and tyloo chased more than two thousand miles of planes and dreams, they actually dropped airdrops after flying into the sea.

Even more incredible is that this airdrop is actually lying in the lonely face of the sea is swimming.

"I am going, really. Airdrops!"

"Take the case, the original survival is the son of the game!"

"Wait, how do I feel that this airdrop is a sacrifice to the face of Aruka and Weishen who have exchanged their talents."

"I think it's better to give the pig's head meat."

"Turtle turtle, have you started?"

The audience in the live broadcast room was amazed at the luck of being alone. First, they escaped from the dead. Now they are empty-faced...

So many people feel that this is a must-have for three teammates. They have buried the seeds of evil in their hearts and are ready to have a chance to try them in the game.

However, at this time in the game competition, Liu Zilang saw a few cars suddenly entering the field.He quickly said, "Quickly fill the one in the smoke, Qinmei went to the bridge and drove another car."

At this point, the two teams that drove up were obviously not going to stop, but Liu Zilang only had him riding a motorcycle.

If they collide with each other, they will lack mobility, so he will let Yu Qin Qin quickly go to the bridge and drive.

Li Muqiu heard Liu Zilang's words, UU read www.uukanshu.com He also quickly cut out the grenade and threw it into the smoke.

You know, if the knocked down person is added by another team, then the head kill can be robbed by others. In the game, this small mistake can not be committed.

In the sound of an explosion, the Aruka on the beach was overtaken by Wei Shen and Xiao Ying...

Stay informed of NEWEST chapters of Kar98K Upon Touchdown! with notification directly sent to your email.